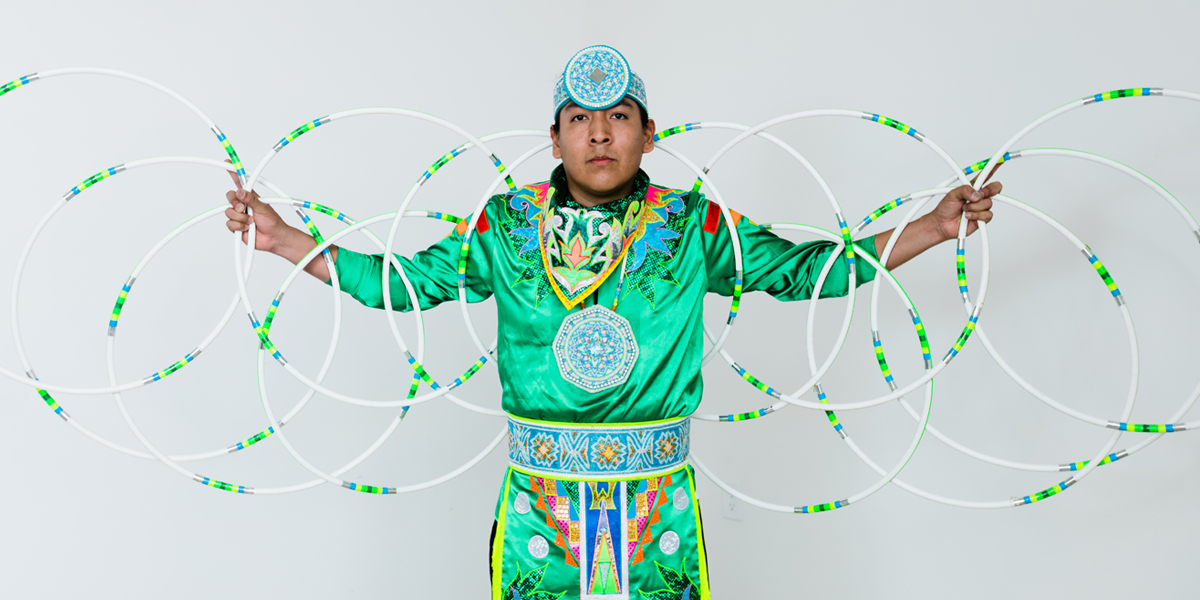 How Patrick Willie rediscovered his heritage, one hoop step at a time.

“What does one hoop represent?” Patrick Willie asks at the end of every weekly hoop dancing class.

“The world,” one grade-schooler answers, loudly, so he can be heard over the Native American drum class in the far corner of the cafeteria. Another dancer adds: “The circle of life.”

“What do we dance for?” asks Willie, who has been teaching hoop dance classes to 5-to-12-year-old students at Alpine District’s Title VI Indian Education programs for eight years.

Willie, 29, of Orem, is a math major at Utah Valley University, and one of the state’s busiest hoop dancers. He’s part of an informal collective of American Indian artists whose savvy use of social media helps them serve as digital cultural ambassadors.

“They’re really comfortable with the format, and they know how to use that media to promote Native culture,” says Dustin Jansen, director of the Utah Division of Indian Affairs. “They feed off each other and encourage each other. They help each other out a lot.”

A lot of people can make patterns with hoops, but Willie’s style is distinctive because he doesn’t forget he’s a dancer, says Jansen, an assistant professor of American Indian studies at UVU. “He doesn’t rely on using the hoops to do everything for him,” Jansen says.

Willie likes “to think outside the hoop,” inventing movements inspired by nature or pop culture. He’s perfected a unique pickup of his first hoop, where he appears to jump inside the circle and lift it with his feet. “There’s not anybody else I know of that does that,” says Terry Goedel, one of Willie’s mentors. Goedel, a world-champion California hoop dancer, is a legend in the Utah dance community, and his son often dances and teaches with Willie.

Willie practices an art form that’s uniquely popular in Utah, particularly in Utah County. That’s thanks to the strength of the American Indian studies programs at BYU and UVU, and the prominence of BYU’s Living Legends performance group. Also significant is the Intermountain All-Women Hoop Dancing Competition, with its fourth annual competition slated for August 22 at This is the Place State Park. It’s the only all-women hoop dancing competition anywhere, says Tacey Sáanii Atsitty, coordinator of the park’s Native American village.

Beyond dance performances, Willie is developing a following on his YouTube channel, where he posts funny, optimistic videos. He’s aiming to be the kind of role model he didn’t have growing up a “city native” in Orem.

Dancing has taken Willie all over the world. He’s performed in China, Australia, Fiji, France, Canada and all across the United States. In February, he earned sixth place in the World Hoop Dancing Championships at the Heard Museum in Phoenix continuing a string of six top 10 finishes, after claiming fourth place in 2016 and fifth place in 2019.

“He’s totally in it for the kids,” says Amy Ieremia, a dancer who previously taught in the Title VI program, and whose children now take Willie’s classes. “It’s all about passing on what he knows. If he knows or comes up with a move, he’s totally open to teach it.”

She adds: “My kids love to watch his YouTube channel. They quote it.”

Willie’s parents were raised on the Navajo Nation in New Mexico, but he and his sisters grew up in Orem, where there were just a handful of American Indian students in their school. “Growing up, we knew a little bit about the Navajo lifestyle and culture but not a lot,” he says.

He was teased about his long hair, and kids often mistakenly assumed he was Hispanic. Willie started fancy feather dancing when he was young, but as a kid, dancing was just a “once in awhile” thing for him.

He rediscovered hoop dancing in his 20s, began studying with mentors, and then committed to practicing daily. Dancing became a way for him to more deeply understand his heritage.

One of the first original moves Willie created involves spinning four hoops on his arms, then adding a fifth hoop spinning on his leg. “When I do that move, I hop on one foot, and then I dance backwards,” he says. It looked like a hummingbird, a friend said. “And then I found out the hummingbird is the only bird that can fly backwards, which adds another layer.”

Three years ago, Willie launched a service project for Native American Heritage Month in November, borrowing the idea from one of his hoop dance heroes, Tony Duncan. Willie volunteered to present dance performances at Utah schools for free.

To advertise, he distributed flyers and posted notices in teachers’ lounges and on Facebook. In one month, Willie performed 34 presentations at 27 schools, including one day when he performed at four schools. He danced in libraries, gyms, auditoriums, commons areas and classrooms.

He rode his bicycle to most presentations, because he doesn’t own a car, but also because he loves cycling. Riding his bike, Willie says, offers him a chance to model healthy living in a culture that faces diabetes and other health challenges.

During November 2017, Willie biked more than 200 miles to schools, where he performed for some 4,000 students. During his performances, everything that could go wrong did, including once when one of his hoops flew into the audience.

Along with dancing, he taught students about contemporary American Indian culture and worked to combat what he calls “TV stereotypes.” There are 562 tribes in the United States, and all tribes are different, he told students. “Don’t call this a costume,” he says, because American Indian dancers aren’t characters playing dress-up. “We prefer ‘outfit’ or ‘regalia.’”

In a video about his service project, Willie concludes with trademark humility. The camera captures a boy who tells Willie his dancing is “awesome.” And then another kid asks: “Are you from Hawaii?” and the camera pans to Willie’s bemused face. “Kid, did you not listen to what we just said?” he asks with a smile, just another sign that his work as a cultural ambassador isn’t completed.

Willie’s most popular video showcases his original moves as he dances at some of Utah’s most iconic landscapes — at the State Capitol, in Provo Canyon, on the shores of the Great Salt Lake and in Monument Valley.

It’s worth watching to see Willie’s sophisticated hoop movements, and to see his colorful regalia in contrast to Utah’s blue skies and red rocks.

But the most fascinating part of the video is the ending, which highlights the joy of Patrick Willie. He’s dancing on a beautiful fall day, and as he steps on a hoop, he flings a handful of hoops over his head, a move he’s performed thousands of times. But this time, one hoop escapes to lodge high in the tree leaves above him. It’s a dramatic moment, and the camera keeps watching Willie as he stops dancing to look up for his missing hoop.

Hoop dancing reflects life, and things don’t always go your way. “When you drop a hoop, you have to adjust on the spot,” Willie tells his students in dance class. “When you adjust, you’re changing the story.

In the video, the camera watches Willie as he laughs and keeps laughing as he walks out of the frame. The story of this Utah dancer has just changed, and it’s a moment worth watching over and over and over again.